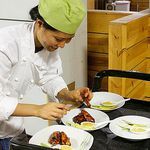 A chef who weighed 98 pounds, Seth rode 4,262+ miles on his 80-pound bicycle from coast to coast in the U.S. in 2016, organizing his award-winning recipes for this book into categories and chapters,

Seth started cooking plant-strong farm food in his parents' kitchen at the age of 11. After a decade-long career in several professional kitchens between Pittsburgh and Washington, DC, he developed a distaste for meat-centric, butter-drowned, flour-rich and sugar-laden standard American food. He quickly outgrew the art and techniques of making food in conventional kitchens.

In 2013, he identified a need for healthful foods and made it his business to help individuals with or without health conditions eat healthier. He has cooked for clients in Pittsburgh and Washington, DC metro area for more than three years. His slow food brunch served once a month was discovered by out-of-town foodies. Prior to his bicycle travel, he ran an organic raw juice bar and vegan cafe that earned a gold-plate recognition by Sustainable Pittsburgh Restaurants.

Nearly a dozen of his recipes won top prizes in national and local contests open to professional chefs. Some others were published in Taste of Home Magazine, The World's Best Asian Noodle Recipes: 125 Great Recipe from Top Chefs cookbook and on a few blogs. He has been written up by several bloggers and food writers.

Two hard copies of cookbook mailed to your library. Free shipping. Buy directly from author for half price. Only libraries with valid addresses, please.

The fist 250 readers to pre-order _ Invite to book launch party with refreshments I personally made (There will be two launch parties, one in Pittsburgh, another in DC area.)

Everyone _ Signed hard copy of the cookbook delivered to you. Also cookbook in electronic format readable on tablets, kindle, etc.

BONUS: The first 25 readers to pre-order _ Any one of your favorite recipes will be adapted by eliminating and/or replacing certain ingredients. Or completely changing the method of preparation to make it vegan and healthier for you. It will be printed in the book with your name in the recipe title. (Alison's Raw Berry Banana Coconut Ice Cream)

Two signed hard copies of the cookbook delivered to you and a friend. I will mail books separately to two delivery addresses if needed.

Based on your health issues (if any) and/or your personal fitness goals (fat loss, muscle gain, etc.), I will email you an easy to follow diet plan customized with a list of what to eat and what to avoid.

Five signed hard copies of the cookbook delivered to you, friends and family members. I will mail books separately to different delivery addresses if needed.

Buy directly from author. Twenty hard copies of the cookbook delivered to your bookstore. Free shipping. Only existing bookstores with valid addresses only, please.

Twenty-five signed hard copies of the cookbook delivered to your office, organization or fitness club. etc.

Suitable for rewarding your employees and motivating club members to cook at home.

I will split your group into small groups of 6-7 people and lead as a personal grocery shopping guide at a local specialty grocer or food co-op, teaching you how to identify the freshest veggies and ripe fruits, how to read package labels to determine nutritional values, how to save money on groceries, how to buy bulk ingredients to save money and be responsible for the Planet and from which sections, aisles of the store you should do most of the shopping.

Calling for artisan food producers, manufacturers and retailers! if your company makes or sells plant-based food products in stores or online, I'll create a recipe with as many of your plant-based food products as ingredients as I see fit and publish in the book. Your company name and/or product brand (s) will be printed in the ingredient list. For example, see my contest-winning (non-vegan) recipe from 2012 using 11 Trader Joe's ingredients: http://www.traderjoes.com/recipes/recipe/158

Your Web address and logo will be printed along with the recipe.

One hundred twenty-five signed hard copies of the book delivered to your company address.

Cookbook in electronic format readable on tablets and kindle, etc.

Update #1 - I'm also fundraising for compassion toward animals and other beings June 27, 2016

Eight pre-orders so far! I couldn't be more thrilled.

As you know, I'm traveling by bicycle. To make it even more awesome, I'm doing a 4200+mile bikepack to fundraise for Compassion Over Killing.

I believe in a world in which each person cares about all beings (factory-farmed animals raised for meat, dairy and eggs; meat production workers _ many of whom are undocumented immigrants_ forced to wear diapers during their shifts in lieu of a single bathroom break; and trees bulldozed from land that turns into livestock farms and GMO corn or soy fields).

Read my full story at the link.