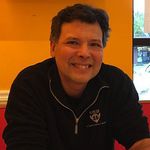 He has been a founding member of several leading Internet and mobile technology companies, and has often served as a director, business development, and communications executive for these companies.

Kenji Harada and Jain met at the introduction of David Pool, then co-founder of Compuserve and board member and Bob Mccausland, then CEO, Freei Networks. He met Jain as a founding member of FreeInternet, one of the largest internet service providers in the U.S. in the late 90s and 2000 with over 3 million subscribers nationally. Naveen was Chairman of the Board and investor. Chris reported to the board on occasion and was head of Asia Pacific operations for FreeInternet.

Harada recently published an article about Jain's career in a local weekly publication in which he was nominated and awarded the 2016 Asian Technology and Innovation Award. This collaboration inspired Naveen and Chris to jointly write this book. In addition to magazines and newspapers, Chris has been published previously by the the U.S. - Japan Foundation and National Conference of State Legislatures (NCSL).

He was Editor/ co-Publisher, and technology reporter for the Asia Pacific Economic Review for ten years in the 1990s. During this time, he reported and published landmark stories as a member of the first official U.S. trade mission after President Clinton normalized trade relations with Viet Nam, post war Cambodia, and the peace treaty negotiated between President Fidel Ramos, Speaker Jose De Venecia, Jr., and Islamic rebel leaders in Mindanao, Philippines. Harada also led technology company trade missions which included meetings with country Presidents and Ministers throughout the Asia Pacific region. 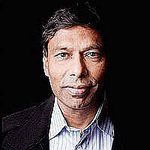 Naveen is an entrepreneur and philanthropist driven to solve the world’s biggest challenges through innovation. He is the founder of several successful companies including Moon Express, BlueDot, Intelius, Talent Wise and InfoSpace. He also served as Chairman of Freei Networks Ltd. (FreeInternet).

He has been awarded many honors for his entrepreneurial successes and leadership skills including “Ernst & Young Entrepreneur of the Year”, “Albert Einstein Technology Medal” for pioneers in technology, “Humanitarian Innovation Award” at the United Nations, “Distinguished Global Thinker Award” by IILM, “Most inspiring Entrepreneur” by Andaaz TV, “Most admired Serial Entrepreneur” by Silicon India, “Top 20 Entrepreneurs” and “Lifetime Achievement Award” for the leadership in the technology industry and support of other entrepreneurs by Red Herring.

Moon Express is the only company to have permission from the US government to leave earth orbit and land on the moon. It has developed a robotic lunar probe and lunar lander to harvest planetary resources on the moon for the benefit of humanity.

Naveen is a trustee of the board and vision circle member at the X PRIZE Foundation where he is focused on finding entrepreneurial solutions to address the global challenges in health, education, poverty, agriculture, and energy. He is on the board of Singularity University, an interdisciplinary university with the mission to educate and inspire leaders to address humanity’s grand challenges through innovative technologies.

• 200 Limited Edition Paperback Copies
• Ebook (PDF, ePUB, MOBI)
• Recognized as a Space Innovator in the printed Limited Edition, the commercial release edition, and the final Ebook (PDF, ePUB, MOBI)
• Free tour of the Moon Express offices with guide providing detailed insights into the lunar travel experience and the operations.
• Keynote Address by Naveen Jain and Chris Kenji Harada on the future of space exploration and the abundance mindset.

As you may have noticed, our book title has been changed to “Gut Check” from “Moonshot”.

It also includes a stronger emphasis on Naveen Jain’s emphasis as CEO and founder of health technology company, Viome, and the company’s revolutionary approach to health care. The book was complete, but warranted new revisions as building the Viome case and advancement by Viome and gut microbiome discoveries continues.

The authors are reviewing and revising these new chapters of “Gut Check”, which will when completed, will be fully completed book ready for publishing.

Special thanks to Cindy Postma, retired professor of Barnard College, NY, for your valuable help with edits and revisions.