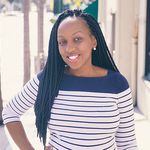 Eraina Ferguson is a tech entrepreneur and journalist. Her story was featured in “The New Haven Register.” She holds an M.Ed in Education and an MAR in Religion from Yale.

Eraina Ferguson is a tech entrepreneur and journalist. She launched  My Good Life, an e-newsletter, to help parents with special needs children live a good life despite their circumstances. After giving birth to a special needs child while in college, she completed two graduate degrees from Yale and Boston College.

Her nonfiction writing has been featured in Ebony Magazine, Yale News, and Thrive Global. She was also featured in The New Haven Register, The Verge, and Today Show Parents. After appearing on the network television show, The Real,  she was interviewed by Time Warner Cable where she discussed the importance of self care.

A HUGE thank you and First run of My Good Life

We are almost there.  So many amazing things have happened in the last couple months.

Thank you again for your love and support and I am thrilled to share my story with you.