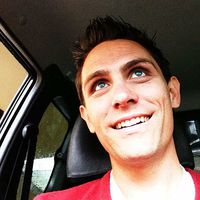 Born in the sunny southern tip of Africa, Giovanni Cirillo has the privilege and the pleasure in watching the mighty Helderberg mountains cool themselves off by dipping their feet into the great Atlantic ocean - every day!

Imagine imagination. Growing up in the original Tol House where weary travellers would stop for a much needed rest before attempting to cross over Sir Lowry’s Pass with their ox-drawn wagons is exactly what Giovanni did. Now, some 25 years later, his imagination has spilt over into the real world and Giovanni’s first book 'Eidolon Keeper of Swords’.

Giovanni recently won an international short story contest for his short story entitled ‘Tomar the Terrork Tamer’. It is available, along with eleven other short stories, in an anthology on Amazon titled “Disorderly Lives” ISBN: 9781512093124.

One of the reviews from an online reader:
“Loved the story, one could picture the scene as it was happening, would make a good book/film."

A story about assassins, brothers, guardians and sons brought together by a man and led into battle by a boy.