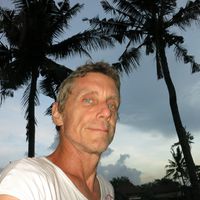 Stephen Black is an artist, producer and writer who has worked in galleries, photo studios, virtual environments and media companies like Fuji TV, CNN, France 2, Cartoon Network and Fox. He graduated from the Rochester Institute of Technology with a Fine Arts Degree in Photographic Illustration. He was the lead actor in The Changi Murals, film by Jun Boo Feng.He wrote, acted in and co-produced Beach Road, the first 360 VR short film to be made in Singapore.