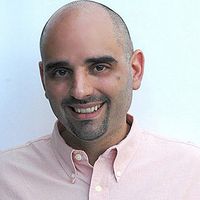 Michael Hebler is a Southern California native living in Southwest Florida. He dreamed of following his passions for entertainment and storytelling with acting. It was while getting his degree in the theatre arts did Michael realize that his penchant for stories was better suited on the page rather than the stage.

In addition to being an award-winning author of his dark fiction Chupacabra Series, Hebler also enjoys films, roller coasters, Harry Potter, as well as volunteering for Meals on Wheels and aiding in animal rights programs. Prior to writing, Michael spent most of his working career in Hollywood as a script reader before transitioning into international film publicity. Previous publicity credits include numerous titles for Walt Disney/Pixar, Lionsgate, Lakeshore Entertainment, Warner Bros., Summit Entertainment, as well as the 2013 Academy Award-winning Best Foreign Language Film, “La grande bellezza” (The Great Beauty).

The Ghost of Christmas Past

A Holiday Journey Into Life... And Afterlife.