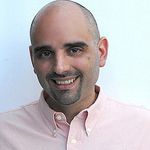 Michael Hebler is a Southern California native living in Southwest Florida. He dreamed of following his passions for entertainment and storytelling with acting. It was while getting his degree in the theatre arts did Michael realize that his penchant for stories was better suited on the page rather than the stage.

In addition to being an award-winning author of his dark fiction Chupacabra Series, Hebler also enjoys films, roller coasters, Harry Potter, as well as volunteering for Meals on Wheels and aiding in animal rights programs. Prior to writing, Michael spent most of his working career in Hollywood as a script reader before transitioning into international film publicity. Previous publicity credits include numerous titles for Walt Disney/Pixar, Lionsgate, Lakeshore Entertainment, Warner Bros., Summit Entertainment, as well as the 2013 Academy Award-winning Best Foreign Language Film, “La grande bellezza” (The Great Beauty).

+ early Trade paperback copy
+ "Thank You" acknowledgment inside the book

$40 Gift of the Holidays

The Ghost of Christmas Past

A Holiday Journey Into Life... And Afterlife.

Embed The Ghost of Christmas Past

NOTE FOR REWARDS: "early" copies of The Ghost of Christmas Past will be sent approximately a month in advance of release date.  Release date currently scheduled for September 27, 2016

Based on Charles Dickens' character of the same name, the first of three spirits from A Christmas Carol is the center of its own story when taken on a spiritual journey to find meaning for its existence.

The Ghost of Christmas Past is unique.  The novella has appeal to readers of all ages, nationalities, and gender. Thanks to Mr. Charles Dickens, the main character name, Ghost of Christmas Past, is already as recognizable as Mickey Mouse, and the general population has shown remarkable interest in learning the backstories of supporting characters from popular works of fiction.  The most notable example would be the novel Wicked by Gregory Maguire, the backstory of the witches from Oz. The Ghost of Christmas Past will appeal to fans of drama, mystery, fantasy, Literary Fiction, the supernatural, and Christianity.

Like A Christmas Carol, The Ghost of Christmas Past is not heavily religious but a story based around a Christian holiday.  In 2014, more than 52 million religious books sold in the U.S., representing an increase of over 10.5% from the previous year. (Nielsen.com: Focusing On Our Strengths: Insights into the Christian Book Market)

The Ghost of Christmas Past will have a large push to capture the attention of the every day reader from multiple avenues.  The money you contribute to the fund will be used in areas of marketing from advertisement to publicity.

- Bookmarks and postcards to be handed out and left in plain sight at multiple places of business including, but not limited to, bookstores, coffeehouses, and libraries.

- Professionally designed online banner ads and the fees to place them on high traffic book sites, blogs, and newspapers.

- Poster boards for live book events, as well as gifts such as tote bags, and handouts such as embossed pens.

The Ghost of Christmas Past follows a familiar plot formula to its predecessor, including the use of "Staves" for its chapter points.

Stave I - Sara and the Spirit - The Ghost of Christmas Past attempts to help a troubled woman in modern day, who then extinguishes the Spirit's flame.

Stave II - The Christmas Angel - The Ghost of Christmas Past learns he had chosen to abandon his memories when transitioning into the afterlife.  Led by the Christmas Angel, the Spirit is taken back in time to find its flame, and watches the troubled young lad it once had been.

Stave III - The Other Spirits – The Spirit has had enough.  It refuses to watch any more images.  Other spirits arrive to help convince the Ghost of Christmas Past to reconsider.

Stave IV - The Flame –The Ghost of Christmas Past no longer requires convincing.  It accepts the challenge to rekindle its flame, no matter the cost.

Stave V -Restoration – With its flame restored, the Ghost of Christmas Past picks up where it left off with the troubled woman, Sara, and helps to restore her own meaning of Christmas.

Stave VI - The Old Woman and the Spirit –The Ghost of Christmas Past visits its next subject, a familiar woman who does not yet know how desperately she is in need of the spirit's magnificent gift.

The Ghost of Christmas Past excerpt #1 from Stave I: Sara and the Spirit

The Ghost of Christmas Past excerpt #2 from Stave II: The Christmas Angel