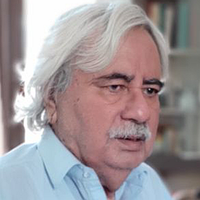 Abdul Qadir is amongst the leading playwrights in this region of South Asia. His excellence encompasses social as well as anthropological issues. He writes to rewrite history and brings to life the forgotten values. Hailing from a village Janhan at the brink of the Thar desert in Sindh, the southern province of Pakistan, he seldom misses to point out the prevailing harsh realities affecting the day to day living of ordinary people. He has been honoured with the prestigious awards for creative writers including Presidents' Pride of Performance for 1989 and 2008, the PTV award for the best Script Writer three times.

A thrilling story opening a window into the ancient culture of the Thar Desert. A man's journey of survival and love during the time of British rule in the region.