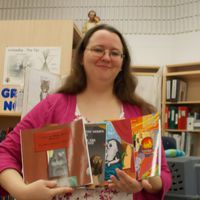 Vickianne Caswell is married and has one daughter, who has an amazing gift with animals (all animals, wild or tame seem to love her). Vickianne was raised an animal lover, in the cities of Saskatoon and Regina. She has been writing at home since she was a teenager, after her father got her interested in writing when he published a poem. She has done a few articles for a small paper on animal care and continues to experience the joys of pet ownership on an acreage where the family now lives.

Vickianne began writing again in 2012 after the quiet life and animals on an acreage inspired her and is now a proud member of the Saskatchewan Writers' Guild. She had wanted to create a set of children's stories in memory of her rabbit Freckles and the desire to teach morals that are sometimes forgotten. She published her first book in the series entitled, "Freckles the Bunny Series" in 2012. Since that time, she has published 4 more books in the series and a companion book that shares information about the real animals from the stories. Vickianne is currently on her second series as well. "Sherlock the Remarkable Cat Series," was published in January of 2014. She has won a Readers Favourite 5 Star Review Award for most of her stories.

Vickianne's children's books are based on her real pets with the same unique personalities. Many were unwanted, strays or rescues and each special in their own way. Every book in each series comes with "Fun Facts" and a "Behind the Story" at the back of every book. She is always more than happy to visit a school with Freckles III and put on a presentation/story hour for children.

Vickianne is currently working on both series' as well as some other childrens books and visual novel games. She is currently writing, "Caring for My Pets" which illustrates how to best care for your pets and "Don't Feed that Duck!" which illustrates why waterfowl should not be fed bread and crackers. It is her goal for later in the year to submit "Through the Eyes of a Bunny" which follows a little bunny from the pet store to being left and unwanted until it finally finds it's forever home, to a publisher.

Sherlock the Remarkable Cat Series, B...

Sherlock is based on a real cat with the same unique personality. Join him as he learns life lessons with his friends. Not a mystery book.

Freckles loses the anti-bullying contest to her best friend. Jealousy ensues and Freckles becomes a bully. Will she stay a Freckle Monster?