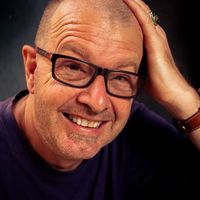 "Not only is he a great and entertaining writer but, I can tell you his insights on life are invaluable!"
- Kerryn Benbow, Senior Events Manager (Red Cross, AMP, Symantec)

Australian Mark Elder has worked as a magazine designer, a photojournalist and a musician. His travels have taken him such diverse places as war zones in Afghanistan to Everest Basecamp in Nepal and Yakuza bars in Japan. He has studied mindfulness at a Vipassana (ten days of silence) retreat as well as releasing the Kundalini in India ("oh, wow!").

But it was his work as a telephone crisis volunteer - and trainer - that inspired this book. The years that he spent on the phone gave him the skills and insights into helping people climb out of the emotional danger zone. His time in various war zones and places where people are suffering also provided many insights into the human condition.

He has had articles published in publications such as GQ, Elle, Gourmet Traveller and others. His recent diagnosis of early onset Parkinson's Disease has given him extra insights into using his coping skills. It's done nothing for his typing technique, though!

Get Yourself From Crisis To Coping

A simple and easy-to-use toolbox of techniques to get you out of the emotional red zone. Start coping and smiling and thriving.