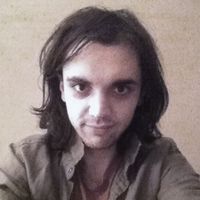 Adam has always loved to travel. His first experience with real travel was a family trip taken when he was fourteen. Accommodations were made, the bags were packed and soon they were taking off into an overcast Pennsylvania-sky and landing in a foreign world called "Phoenix, Arizona." Adam met a lot of folks in Phoenix. He saw a lot of things. He collected their stories.

He followed this up with a brief stint working in a Guatemalan orphanage when he was 16. Many beautiful people were met, and they all told Adam their stories. Some were marked by crime and death and were very sad; others lifted him up with stories of hope and recovery. He collected their stories, too.

Adam studied literature, writing and art history at various schools. Montgomery County Community, Eastern University, and it was with the latter that he was presented the opportunity to study abroad in Salzburg, Austria.

Adam first fell into writing ten years ago when he was 20 and spent some time gallivanting about Europe. The long train rides provided him with time for his mind to wander, and the beautiful backdrops of Austria and France and Hungary provided the quiet inspiration writers are always looking for. Ireland's windswept fields and Switzerland's rocky, snow-capped peaks stoke the imagination like nothing else.

Adam learned all about the places and the things that he saw; the Book of Kells, the Holy Crown of Hungary, Getreidegasse 9 (Mozart's birthplace in Salzburg), the city of Rome and the beautiful crumbling ruins that enchant it. Adam collected all their stories to himself.

Traveling, exploring, meeting new people and discovering new places and new ways to think and be are how stories are collected and turned into something else, with something new to say or a new question to ask. If Adam had his way, he would get in his old Chevy Cavalier and drive across the Continental United States, staying in little motels and collecting all the stories available to him along the way, using them to fuel his own storytelling.

Adam has two years experience working as a professional writer in the form of local journalism when he had the chance to write for Montgomery Newspapers.

More specifically, Adam was eventually given his own art column ("State of the Art"), published with Montgomery Media's "Ticket" entertainment.

Adam has worked every day to hone his writing. One of his favorite authors, Stephen King, said he writes at least 1,000 words everyday (except for his birthday and the Fourth of July), and Adam does the same, knowing that writing (crafting a story) is more than inspiration and genius; it's work. For Adam, it's the ultimate construction project.

Crafting a story has so many levels: first the idea, naked and spinning in the author's head; then a few walls, some concrete here and there, a voice or two to help make sense of it all. Understanding how to convey meaning with the right words, and how to temper that meaning to the desired degree is something writers have to practice everyday.

A few really great books on writing that have helped inspire Adam's writing:

"The Forest for the Trees" by Betsy Lerner
"Thanks, but This Isn't For Us" by Jessica Page Morrell
"On Writing" by Stephen King
"The Faith of a Writer" by Joyce Carol Oates
"On Writing" by Sol Stein
"The Art of Fiction" by John Gardner

Keep it in the Family

An ostracized woman from a well-to-do family encounters the remnants of an ancient cult when she takes the job of governess for a recluse.