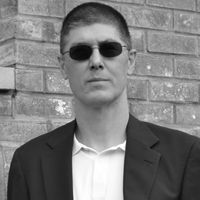 L.D. Beyer is the author of two novels, both part of the Matthew Richter Thriller Series. His first book, In Sheep’s Clothing, was published in 2015 and reached the #4 spot on the bestseller list for Political Thrillers on Amazon Kindle.

Beyer spent over twenty-five years in the corporate world, climbing the proverbial corporate ladder. In 2011, after years of extensive travel, too many missed family events, a half dozen relocations—including a three-year stint in Mexico—he realized it was time for a change. He chose to chase his dream of being a writer and to spend more time with his family.

He is an avid reader and, although he primarily reads thrillers, his reading list is somewhat eclectic. You’re more likely to find him with his nose in a good book instead of sitting in front of the TV.

Beyer lives in Michigan with his wife and three children. In addition to writing and reading, he enjoys cooking, hiking, biking, working out, and the occasional glass of wine.

An Eye For An Eye

A powerful drug lord threatens to bring America to its knees. Only one man can stop him.