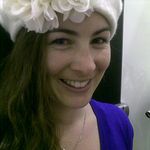 Michaela Daphne studied Mass Communication at Queensland University of Technology, majoring in television and advertising and graduating with honours. She has worked in marketing communications for
Ignite Conference[1], a major Australian youth empowerment movement that prides itself in impacting young people so that they are "not just changed for a day, but transformed for life".

She has written several short films, tv scripts, stage plays, and fiction stories. Read about her witty view of the world on Australia's largest independent women's website,
Mamamia.com.au[2].
Michaela Daphne authored sections in the books
Learning to Love[3] and The Word Made Flesh and Shared Among Us[4] and edited Up The Beaten Track[5].

Thank you for supporting this campaign!

You will receive:
• One copy of the e-book

$25 I still love the smell of books package

$30 I knew her before she was famous package

You will receive:
• One copy of the e-book
• One signed cloth cover hardback copy of the book, specially made by me

$50 support the cause package

You will receive:
• 10 paperback copies of the book

The Hidden Grove Series - Book I

Evelyn is searching for freedom from her past but instead finds herself twisted in every dad's nightmare.

NB: all currency listed are in US$ - click here to convert to your currency[1].

Author's Note: This book, I wouldn’t say is to be enjoyed, but rather survived. It is not a whimsical fairy tale. Purlieu is the shadow of a figure beneath a tree on a long, empty street. You may notice him or you may not.
What people are saying about Purlieu:
"This book was a page turner – you can’t help but get drawn into the relationship of the two main characters and learn quickly that relationships may not always be what they seem on the outside. It’s a book filled with courage, hope, and will keep you wanting more."

"I have read so many Christian novels and this one kept me on the edge of my seat with the rest of them. I was dying to find out what happened. And on top of that, the message behind this book is an important one for our time."

Purlieu is a mysterious world beyond the hidden grove. There Evelyn is whisked away from her troubles by an alluring stranger. He is all that she had dreamed of until the peace she had hoped to find is less than so.

Separated from her family and friends, it is up to Evelyn to escape Purlieu. The hardest part begins with the decision to leave.

I have heard too many stories of women stuck in abusive relationships, unable to leave. I want to offer these women a place where they can be a fly on the wall to a story that perhaps mirrors what they are going through themselves. As they wish for Evelyn to escape, they may see the need for themselves to do the same thing.

Purlieu began as a whimsical fantasy romance, but after experiencing first hand the entrapment of abuse, I decided to change the direction of the story.

So many women get into these relationships and they are so desperate to accept even the smallest amount of love. They don’t want to get out of them because it’s comfortable and they’re afraid what may happen if they leave - what he may do if they try to leave.

From my own experience, no one can convince you to leave a bad relationship, it is something you have to realise and choose for yourself. A book is so personal: you're in your own little world, your own little space, and you really do put yourself in the shoes of a character. You are reachable in a new way in that place. A story can help you realise what nobody else can.

I am the best person to write this story because I've been there myself and I escaped to tell the story, by my own choosing. I hope that any woman in that kind of situation who reads this book will be able to see their relationship for what it is and to find the courage to choose to leave.

The funds raised from this Publishizer campaign will first go to hiring a professional editor, second to Publishizer fees associated with running this campaign, and third to printing and distributing the book to you to fulfil your pre-order.

If I were to reach my campaign goal of 500 pre-orders (which equates to $12,500 if every person were to purchase the $25 second reward tier), I would only just be covering my minimum costs:

Above are all of the non-negotiable costs associated with running this campaign. It does not include marketing or say, the cost of a launch party. By meeting my campaign goal, I would have an unforeseen expenses buffer of just $1,241.01 so please know that book writing is not a money-making game. I'm more concerned with spreading the message of this book than by making a living off of it.

This book is not for everyone. Certainly not my parents. It gets a bit awkward, sexually. It’s also not a ‘nice’ story, so be warned. It would be M15+ rated if it were a movie.

There are two main markets for this book:

* Readers
* Those who would buy on behalf of the readers

Purlieu is written to be read by women aged 15-30, particularly those who are in or have been in an abusive relationship.

Two of my beta-readers have personally experienced abusive relationships and have found upon reading Purlieu that:

With all of this in mind, family and friends concerned about someone in an abusive relationship are the second market for this book. Ideally they would purchase or recommend the book to their loved one who is in a bad relationship. It is a non-confrontational way of expressing concern and allowing their loved one to choose to get out of the relationship herself.

The
Michaela Daphne website[1] (which has had over 1500 unique visitors) includes links to my already published writings[2], as well as a page for the Hidden Grove series[3] and a page on the book Purlieu[4].

My
blog[5] has been redeveloped to focus on stories of the lives of women (teen and young adult, as told by them) and advice on growing up. New posts are added on a weekly basis. By sharing other women's real stories, their own network are likely to visit the website and become potential followers of the Michaela Daphne blog.

From my email database I send regular updates on the Hidden Grove series, Purlieu, and new blog posts.

I have stopped using the Michaela Daphne Facebook page as my target market doesn't really use Facebook anymore. I do, however, have a large friendship base on my personal Facebook account. I will be reaching out to them to rally them behind me during the Publishizer campaign, as well as during the book launch in 2017.

My Instagram account has a growing following (200+). I post a variety of things from what it is like to be a writer, updates on the Hidden Grove series, the everyday life of a creative person (and the things I create), as well as what I'm reading.

I will be doing a countdown to the launch of the Purlieu Publishizer campaign on Instagram, as well as updates throughout the course of the campaign and continuing on towards the book release in 2017.

I contribute monthly to leading Australian newspaper, the
Catholic Leader[7], which has a readership of over 50,000 each week. I write on topics[8] that range from abuse and relationships to Church teachings and the Christian walk.
In addition, I have submitted a press release to the Catholic Leader, which has led to the publishing of an article in their May 28th domestic violence issue, focusing on Purlieu, the Hidden Grove series, and my hopes for the book. This will be accessible via their print newspaper,
website[9], and Facebook page[10].
When the book is launched in 2017, I will be submitting a similar press release to my local newspapers The Reporter, Albert and Logan News, the Brisbane Times, Brisbane News, Queensland Times, and Our Logan magazine as well as local magazine
Bella[11] and local radio station 96Five[12].

I write for
Catholic Online[13], which has a targeted audience of over 100 000 users per day with visitors coming from over 120 countries around the world. I intend to continue writing for them weekly during the course of the Publishizer campaign and beyond as well as breaking into several other reputable blogs with large readerships.

Purlieu takes the fantastical
journey to another world of the Narnia series, Peter Pan, and Playing Beatie Bow, and combines it with the inner thoughts of So Much To Tell You, the coming of age in Looking For Alibrandi, and the hard-hitting realities of life in The Fault In Our Stars.
See:

Narnia Series by C. S. Lewis[1]
Peter Pan by J.  M. Barrie[2]
Playing Beatie Bow by Ruth Park[3]
So Much To Tell You by John Marsden[4]
Looking For Alibrandi by Melina Marchetta[5]
The Fault In Our Stars by John Green[6]