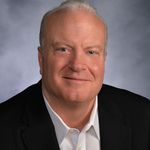 Monroe moved to Chicago in 1992, and the city became the setting for his debut novel, 57' Chicago and its successor, 46' Chicago. Both books were critically acclaimed with the latter being hailed as one of 2002's best mysteries by the Kansas City Star.

Steve now splits his time between Chicago and Seattle. Steve is releasing his next novel, Pursuit, as an ebook and print on demand with Open Road Distribution.

PURSUIT’s conservative F.B.I agent. He’s hiding a secret. With this package you get an advance ebook of my upcoming novel, PURSUIT. And like Martin, you’ll get more than you bargained for…

A detective in PURSUIT, “…he had dark eyes under a thick brow that looked like it had been molded by the pad of a football helmet.” This package gets you an advance paperback copy of PURSUIT before anyone else sees it.


A hard luck gambler from ’57, CHICAGO, Poochie knows you can’t win if you don’t play. Play at this level and you receive an advance e-copy of PURSUIT plus a copy of my novel ‘57, CHICAGO, which Esquire called a “welcome addition to the (boxing) genre.”

Wealthy socialite in ’46, CHICAGO. “…once you have money, you see things differently. You stop worrying about missing the boat and start thinking about buying one.” This purchase is a boatload; you get an autographed copy of either ’57, CHICAGO or ‘46, CHICAGO (which the Kansas City Star called one of the top five mysteries of 2002). You also get an advance ebook and paperback copy of PURSUIT.

Junior, “The Hammer,” Hamilton. Heavyweight contender in ’57, Chicago. A good man in a bad city. But can he be bought? Purchase this package and receive autographed copies of both CHICAGO books, along with an advance copy of PURSUIT in the format of your choice (paperback or ebook).

Wealthy investor. Would-be politician. ’46, CHICAGO’s Arvis Hypool wants it all. Buy this package and I’ll dedicate a copy of ’46, CHICAGO and ‘57, CHICAGO to you or your buddy, and you’ll also receive an advance copy of PURSUIT in the format of your choice (paperback or ebook).

Fight promoter Robert J. Lipranski. “The Lip.” Built like a bowling ball. Filled with rage. ’57, CHICAGO’s The Lip wants to stage a big heavyweight fight. But circumstances transpire. He’s backed into a corner and…Wanna know what happens? Buy this package and get autographed copies of ‘57, and ‘46, Chicago, with a 30-minute Skype Q&A with yours truly.

Had some bad gambling luck recently? Go see Al. ’57, CHICAGO’s bookie will take your bets. And this package is a lock: You get 10 copies of any one of my titles in e-format, along with a 45-minute Skype session with yours truly. We can talk gambling, books or the facts behind my fiction.

Wally Greer. The man in PURSUIT. Wally is a top notch detective with strong morals. A murder in Chicago’s suburbs puts him on the trail of a killer. Time’s running out. Is Wally’s? Purchase this package and you’ll get dedicated copies of ’46, CHICAGO and ‘57, CHICAGO. You will also receive 10 advance paperback copies of PURSUIT, ideal for a book club, plus a 45 minute Skype Q&A with yours truly.

Gus Carson. World War II survivor. A tough cop with tough luck. He’s suspended, working a private case, dangerous. The protagonist from the acclaimed novel, ’46, Chicago, his story didn’t end with the conclusion of that book. Purchase this package and you’ll receive an advance paperback and ebook copy of PURSUIT, and dedicated copies of ’57, CHICAGO and ‘46, CHICAGO. You’ll also receive a never before seen manuscript of “The Long Descent,” the sequel to ‘46, CHICAGO.

Death, family and murder intertwine as two detectives attempt to catch a killer unleashed by Chicago’s most dangerous crime family

53 year old divorced white male. 5'10", 210 lbs. Probably a 6 flat 40 yard dash, hobbling on bad knees. When discussing my “do" I call 'em “my hairs". My mug just took a beating; my ten week old Lab
ambushed me, sent me face-first into the concrete ramp outside my home. The black eye is gone. The scar over my right brow ain't going anywhere. 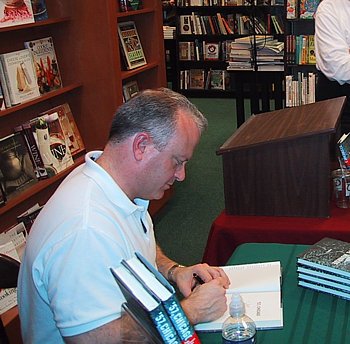 Read on for the story and not necessarily the accuracy.

1998: Four years divorced. Struggling as a commercial real estate broker, closer to dead broke than flush. One arrow in my quiver- the life-long belief (instilled by great parents) that I could write. A story had been percolating (instilled by my bookies) about a bookie, fight promoter and boxer – think the guys sitting ringside during the fight scenes in Raging Bull. I wanted to put a bookie through hell –back drop a real city, street life. I spent nights and weekends at the Harold Washington Library, researching the year 1957.

That year, the University of Kansas and Wilt Chamberlain famously lost the NCAA basketball championship to North Carolina. The game went triple overtime. It was perfect. Research sent me a doozy –the semi-final game that same year between Michigan State and North Carolina ALSO went triple overtime. I chose the latter game. It provided the plot twist that sent my bookie to his bank to get funds, which suddenly became “unavailable".

Irony: I found the real-life murder of a Chicago banker. Body found face down on the concrete. Inside his wallet: A receipt tying mobster Sam Giancana to a loan for a brothel and a slip of paper carrying the banker's credo. The credo: “A man with a financial surplus can control circumstances…but a man without a surplus is controlled by them." Perfect. That's the theme of the book.

And that's exactly what happens. Miramax options the movie rights. Their subsidiary, Talk Miramax Books strikes a two book deal with me. I get a Hollywood agent. The experience is great –good fodder for stories. The following aren't complaints –sour grapes make bad wine.

My agent emails me, tells me she's going to “leak today". I write back that I am, too, but am not going to brag about it.

I fly to New York to meet with the people from Talk Miramax Books. I check into the hotel and the desk clerk tells me they haven't paid for the room. This, my friends, is a precursor.

I meet the staff. Great people. The woman in charge of marketing tells me she's going on maternity leave.

I ask to meet the sales people. They say, “No, it doesn't work that way."

Spring, 2000: Galleys come out. There's a reference on the back cover to a character named Eddie “The Lip". There's no one named Eddie in my book. 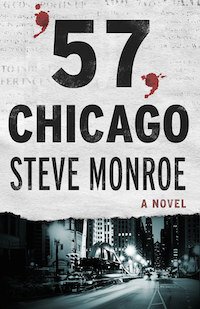 Summer , 2000: The book is released. Reviews trickle in. The New York Times, USA Today, Chicago Sun-Times… Solid, mostly positive reviews. Some raves, including one from a writer in Ottawa who says something akin to, “I have been there –this is accurate stuff."

I visit the Borders on Michigan Avenue, meet the manager. There's a display of my books at the front desk –all '57, Chicago by Steve Monroe. This is a moment. I go back to Borders the following Monday, the books are gone. The manager says they sold out. I ask her if they're going to fill another display when the next shipment comes in. She says, “No, it doesn't work that way." That's it. No more books are coming in, even though they sold out over the weekend. Customers can order copies.

I check Amazon frequently. Sales tick upward after great reviews. Sales taper off, quickly.
Book rights are sold to publishers in Germany and Japan. My parents visit my brother in Tokyo. My mother calls me from a convenience store. “There's a display of your books." This is a moment. The title there reads, “The Rules of Rising Fast." I like it. The German title is, “Knockout." It's okay.

A screenwriter is hired to write the screenplay for '57, Chicago. He politely asks me some questions but has his own riff. Among my answers, “The cop in the wheelchair is based on a couple of real people. He's the book's only hero. I didn't want him to be 'Ironside'."

The screenplay: The first iteration is okay. I ask him to change the names of some characters since they don't resemble the people in my book. I ask him why he's taken the cop out of the wheelchair. He says, “I didn't want him to be 'Ironside'."

The producer takes the script to Miramax. They tell him to change it all back to mirror the novel.

I finish my next book, '46, Chicago. It's a mystery, set in Chicago in 1946 and again, it's fact-based fiction. Real-life: Policy racketeer Ed Jones has made millions by running the illegal lottery in the African American community. He does time, shares a cell with Sam Giancana. He tells Sam that the pennies, nickels and dimes add up to millions. Mistake. Jones is kidnapped, held for ransom.

My fictional twist –dirty cop Gus Carson is hired by a wealthy politician to find Jones.
I meet the staff again at Talk Miramax Books. Great people. The woman in charge of marketing tells me she's going on maternity leave. 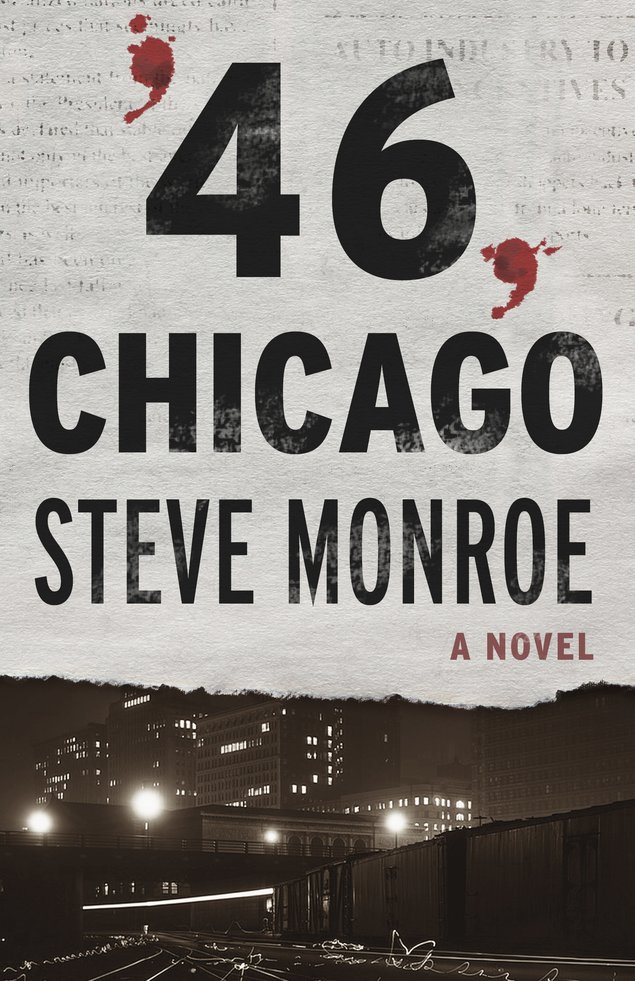 Summer, 2002: Reviews come in. This time the majority are raves. The Kansas City Star gives multiple kudos. The book rights are sold to a publisher in Italy. Book sales are okay. The publisher rounds up unsold hardbacks, break the spines, turns 'em into paperbacks. Sales taper off.
Mike Thomas of the Chicago Sun-Times dubs me “Mr. Happy Go-Lucky Chicago" in a story that runs the entire back page of a section of the newspaper. There's a picture of me hoisting a Bud Light. This is a moment.

At some juncture: Miramax gets the second screenplay of '57, Chicago. They put the project into turnaround. No takers. I get the rights back. Just as well. It's a Chicago story.

I write a funnier, less violent book titled, “So Smooth." It's the story of a bookie's agent that lives in downtown Chicago, thinks he's scamming the world. There are multiple twists. My agent loves it.

There is no more Talk Miramax Books so he hunts for a new publisher. Publishers “love it". No one buys it.

I write the sequel to '46, Chicago. It's the best book I've written. My agent loves it. Publishers “love it". No one buys it.

I write Pursuit. It's a story whose genesis came as I read about the Family Secrets trial in Chicago. The F.B.I. had pulled back surveillance on some mobsters known as the "Chicago Outfit" prior to picking them up to indict them. They found one guy in a small town in Kentucky, paying cash for rent.

I thought about how creepy it would be if you lived in that small town, asked some old man at the diner each morning to pass the sugar, unaware that he was a heinous murderer. Then, I wondered what would happen if that character never left Chicago. Instead, he stayed, murdered someone in the suburbs and wove his way downtown to do something. I interviewed detectives. I saw a sign. It read, “He escapes, who is not pursued." Sophocles.