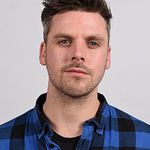 Sam Catling spent most of his formative years feeling like he didn't really fit in, but it wasn't until he started working on cruise ships that he found himself, sorta...

Sam Catling was born in London, England, and grew up in the rural countryside of Essex County.
Displaying an interest in the performing arts from an early age, Sam later went on to study drama, music tech, English literature and film at college.
Feeling somewhat victim to the middle child syndrome (his words not mine), Sam took a chance at working as an entertainer on-board cruise ships to get away from it all.
It was never something he even considered an option growing up, but as soon as the idea became viable after completing college, Sam went about the application process following some sound advice from his Nan.
After spending four years at sea, and many years of trying to readapt to the pace of life back on land, Sam finally found the courage and motivation to write his first book whilst studying for a BA in music business at Middlesex University. Sam has been a hobbyist writer for some time, but never tried to write a book before. His passion for writing comes from a desire to entertain, and since starting to take his writing more seriously, has already begun work on multiple other projects.

In his youth Sam co-wrote a comedy script with a friend, which they had written for a show already in existence and sent into the BBC. In response they received a hand written letter from comic actor Paul Whitehouse, applauding and encouraging the efforts of the script and to keep up the good work.
Sam recalls this to be one of his earliest recognition's of praise he ever got as a writer, and he attributes that encouragement as one of the driving forces that spurred him on through the years.

If books in their physical form scare the bejeebers out of you, then by all means, grab the E-book book only option. There's no judgements here, this is a nice campaign :)
You will also be able to gain access to all campaign updates, and an invitation to join my community detailing future projects and collaborations.

1 paperback copy of the book "Seems Like Smooth Sailing", Plus an E-book copy.
You will also have access to all campaign updates, and an invitation to join my community detailing future projects and collaborations.

If you want to be environmentally friendly, or you absolutely hate paperback books, then choose this option.
This offer contains 1 copy of "Seems Like Smooth Sailing" the E-book AND the Audio-book as well.
The book has been written in a style perfect for this medium, and I very much look forward to recording it.
You will also have access to all campaign updates, and an invitation to join my community detailing future books, projects and collaborations.

Because your so considerate, or because you just dont like sharing, this offer comes with not one but 2 paperback copies of "Seems Like Smooth Sailing" plus a copy of the E-book.
You will also have access to all campaign updates, and an invitation to join my community detailing future books, projects and collaborations.

As the title suggests, this offer comes with 1 signed copy of "Seems Like Smooth Sailing", Plus 1 E-book and 1 Audio-book.
You could read it on a kindle or your phone during your morning commute, read the paperback in the park on your lunch break to show everyone how cool you are, and listen to the audio-book on your way home when your eyes are completely spent. It's completely up to you.
You will also have access to all campaign updates, and an invitation to join my community detailing future books, projects and collaborations.

You will get everything as mentioned in the previous offer, but just in case someone comes up to you in the park, and looks as though they are about to ask what you are reading and where they might be able to buy a copy, you whip out a spare and tell them to spread the good word...but that you also like it back, you paid for it after all.

Only you know your business, no-one else, so who am I to judge if you want a bundle of books to gift out to all your friends!
This offer comes with an E-book, Audio-book, 5 signed paperback copies AND your name in the acknowledgements section of the book.
I haven't even written an acknowledgements section yet, so if you end up being the only person generous enough to choose this option, then it's fair to say that you could have a page in the book all to yourself!

If you are so inclined to go as far as supporting me by choosing this option, then of course you get everything as listed in the offer above, but I will also take you out for dinner in London, providing you choose from the kids menu and you only drink tap. (that's a joke, you can have whatever you like)

It makes sense that whilst I have this platform I may as well try and get a days work out of it.
In my day to day I zip about London using all manner of transport working as a Handyman.
So if you choose this option, you will get everything listed in the captains club offer above, but I'll also come to your house, and do a days labour before taking you out for dinner, and when I say labour, I mean either furniture assembly, painting and decorating, heavy lifting, that sort of thing....nothing kinky!

Maybe the title of this offer is in poor taste, but if you decide that you hate me and my book so much, that you want to get a whole bundle of books just so you can have your very own book burning event, then by all means be my guest.
It's not illegal to burn books that you own, but it is illegal to have a bonfire in most places without a permit, but I'm sure you knew that already didn't you...
You book burning sadist!
Alternatively I suppose you could set up a small book stall that just sells copies of this book, then you could sell them and double your money.
You make a profit and I get more copies out there, win win!

OR!
Maybe you are just so bloody generous that you decide to gift all the books to your friends, family and strangers you meet on the street.
This is an unlikely scenario, but I thought I'd just leave it out there...

Hi everyone. Thanks again for helping me get through this past month by generously crowdfunding my campaign. I am currently awaiting word from publishizer who are working on trying to get me the best deal moving forward.

Hopefully something good will come as a result of their negotiations and I can get the ball rolling again soon.