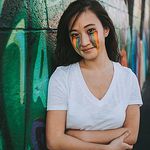 Jessica is an Asian-American LGBT author known for her novels, "Something Tragic" and "Bend For Me."

By supporting at this entry level, you’ll receive reader updates and content throughout the campaign.

• 25 'Signed' Copies
• The ability to pick a name of your choice (within reason) for a minor character in the novel
• Free Ebook (PDF, ePUB, MOBI)
• Free shipping

$1000 Dinner Discussion with the Author

• 50 'Signed' Copies
• Dinner with the author to discuss the novel, LGBT rights and activism, and/or bullying in high school
• eBook included
• Free shipping

(Open to anyone in the US)

An LGBT novel about the journey of self-discovery and embracing love.

As the subject of endless gossip, popular girl Crisa Grayson is the most interesting and beautiful person band geek Addison Warren has ever met. Somehow, she’s also the most tragic.

When they met, it was not of their own accord. In fact, they never would have crossed paths if it wasn’t for the school project. They were juniors. Addison was the quiet, new girl. Having to move in with her uncles after the fire was one of the most difficult things she ever had to endure. Tragic, really. Life always seemed to turn out that way for Addison.

When Addison first started at Parkville High, she knew exactly who Crisa Grayson was, even if Crisa didn’t know her. Crisa was the focus of hallway gossip, infamous for her wild parties and golden hair. On the surface, she seemed like the typical high school cliche. She was bubbly, fun-loving and sometimes even larger than life. But appearances can be deceiving and Addison never expected to interact with the enigma, let alone fall in love with her.

Follow the perspective of Addison Warren as she begins to unravel different layers of Crisa Grayson. Something Tragic is a coming of age, LGBT novel about self-discovery and finding love.

Addison reacts like any shy girl starting at a new school would, taking a seat in the back of the room, hoping to fly under the radar and get through the next two years of high school before heading off to college. But that all changes when she gets assigned to work with Crisa, one of the most popular girls in school. Even in their first moments together, something special sparks between them. She's not sure what Crisa sees in her, and let alone what she sees in Crisa. (But she actually does.)

The unlikely pair slowly begins to develop a friendship, without ulterior motives or academic expectations. Addison learns all the trivial, yet monumental things about the blonde. Like the fact that Crisa likes, no loves, raspberries, is the victim of objectification, and has no faith in love. She also gets to witness Crisa's wild side, realizing that there's more to the popular girl than meets the eye. It's the first time Addison gets to see the popular girl's mask slip away and realizes that no one really knows the true Crisa. (In fact, Addison isn't even sure Crisa knows herself.)

As they continue to spend time together behind closed doors, Crisa unintentionally starts to wedge her way into Addison's heart as more than just a friend; a best friend. The thought of falling for the blonde isn't terrifying though, just inevitable. And Addison does her best to be the supportive, truly understanding friend that Crisa needs. (All while ignoring the way her skin tingles every time they brush hands.)

Later, Crisa shows up after holiday break with a boyfriend, Addison tries not to be jealous, but something about the new couple feels off. Her suspicions are confirmed when the break up is messy and Crisa goes running to Addison. After consoling the girl, Addison fights with her head and heart, trying not to jeopardize the newfound trust she has established in their friendship, but all she wants is to tell Crisa how she truly feels about everything. And when the blonde requests her to come over for a sleepover that changes everything between them, Addison can’t say no. (She can’t say a lot of things, truthfully.)

As Addison continues to peel back Crisa’s many layers, she finds a constricted, broken core that she’s determined to mend. Can she teach her best friend to love and accept herself, without revealing how much she truly loves her? Remaining a platonic best friend gets even more difficult when Crisa tells her that she’s the only one who truly understands her, while lying under a night sky blanketed by stars.  (She still tries to keep things platonic anyway.)

When Crisa  befriends an out-and-proud bisexual, senior named Aria, a whole world of possibilities opens for her. Addison had never discussed her own sexuality with Crisa, but it was pretty clear, at least to herself, that she was attracted to Crisa and her dazzling smile and tragic blue eyes. When Crisa gets a part in the musical, playing so many characters, pretending and pretending,  Addison isn’t sure which Crisa is the real one. She keeps getting so many mixed signals. No matter what persona she takes on, she’s a pretty convincing actress. (And a liar.)

Addison can’t decide if Aria is on her side, or completely against her. When someone makes a homophobic comment about Aria and Crisa, Addison can’t fight the slew of emotions that take over her ranging from anger, jealous, distaste, embarrassment, and just plain sadness. When she looks over at Crisa’s shattered expression, she sees them all mirrored back.

It’s a big step to take, breaking down the barriers of norms and expectations. The only problem is, once the curtains open and the spotlight flashes on her, Crisa isn’t ready to be put in the limelight. Crisa starts to feel the pressures of social hierarchy as well as college applications from her mother whose main concern is prestige and status, something Crisa loathes having so much of and doesn’t want any part of. Despite not being able to stand up for herself, Crisa reveals the one thing she does want; for Addie to stay. (Addison obviously does.)

The turning point in their friendship comes when they decide to run away from their world, going on a two month long road trip. Crisa’s world starts spinning and she slowly starts to spills a few secrets that make Addison’s start to spin as well. There are possibilities and hints, but also so much hesitance. They seem to be beating around the bush, circling the sobering confessions, both terrified of the consequences, yet unable to fight their developing feelings for one another. (It’s the best and worst kind of dizziness.)

The main audience is LGBTQ+ youth, specifically lesbian and bisexuals who are struggling with accepting themselves and feel the pressure of high school, expectations, and trying to find a way to wedge into a predisposed mold, battling with norms vs. their hearts.

The secondary audience would be LGBTQ+ community members who have already experienced this and want to see realistic, non-hypersexualized representation of themselves.

There is a tumblr account dedicated to the novel that will include excerpts, photography and scenes related to the novel, and act as a place to anonymously submit questions and request advice. This is intended to provide a safe place for LGBT/questioning youth to find themselves.

The novel has its own Twitter handle where major LGBT accounts will be followed and networked with to gain a larger audience. Tweets will be sent out daily to followers that conduct survey questions about coming out experiences, being LGBT, as well as include sneak peeks and excerpts of the story.

Title: Without Annette by Jane B. Mason

Summary: Josie Little has been looking forward to moving halfway across the country to attend Brookwood Academy, a prestigious boarding school, with her girlfriend, Annette, for ages. But underneath Brookwood's picture-perfect image lies a crippling sense of elitism that begins to tear the girls apart from the moment they arrive.

Why Something Tragic is Different: Something Tragic takes place in a public school in a conservative area. Crisa and Addison are meeting for the first time. They don’t have any background together. Readers will get to see their relationship develop from friends to lovers.

Summary: Etta is tired of dealing with all of the labels and categories that seem so important to everyone else in her small Nebraska hometown. Everywhere she turns, someone feels she’s too fringe for the fringe. Not gay enough for the Dykes, her ex-clique, thanks to a recent relationship with a boy; not tiny and white enough for ballet, her first passion; not sick enough to look anorexic (partially thanks to recovery). Etta doesn’t fit anywhere—until she meets Bianca, the straight, white, Christian, and seriously sick girl in Etta’s therapy group. Both girls are auditioning for Brentwood, a prestigious New York theater academy that is so not Nebraska. Bianca might be Etta’s salvation…but can Etta be saved by a girl who needs saving herself?

Why Something Tragic is Different: The character perspective is not from a bisexual. Body image is not discussed. The main character has a defined sense of self, but she tries to help her love interest embrace who she is. Addison may not be as well off as Crisa, but she has a solid foundation of support and trust, something that Crisa lacks. It proves that having money isn’t everything. There’s a huge difference between a person who wants something for you versus from you. And Addison will selflessly give up whatever she has for Crisa to finally feel loved.

Title: Under the Lights (Daylight Falls Series #2) by Dahlia Adler

Summary: Vanessa Park has always been certain about her path as an actor, despite her parents' disapproval. But with all her relationships currently in upheaval, she's painfully uncertain about everything else. When she meets her new career handler, Brianna, Van is relieved to have found someone she can rely on, now that her BFF, Ally, is at college across the country. But as feelings unexpectedly evolve beyond friendship, Van's life reaches a whole new level of confusing. And she'll have to choose between the one thing she's always loved...and the person she never imagined she could.

Why Something Tragic is Different: There is no vanity or confusion from Addison’s side. Crisa is the one who is confused and conflicted about embracing her sexuality. Addison is the first, and possibly only girl she’s ever been attracted to.

Title: Over You by Amy Reed

Summary: Max would follow Sadie anywhere, so when Sadie decides to ditch her problems and escape to Nebraska for the summer, it’s only natural for Max to go along. Max is Sadie’s confidante, her protector, and her best friend. This summer will be all about them. This summer will be perfect. And then they meet Dylan. Dylan is dark, dangerous, and intoxicating, and he awakens something in Max that she never knew existed. No matter how much she wants to, she can’t back away from him.

Why Something Tragic is Different: Addison, the main character, is not questioning her sexuality. She is steady and unwavering while her best friend, and love, struggles to find herself. Addison does her best to support her, even when it doesn’t feel like enough. But she doesn’t give up