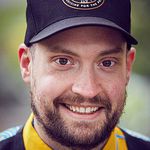 Andrew Marc Rowe is a man with an abiding love of fantasy, mythology, and spiritual fiction and a calling to weave together stories with elements of all three.

Born and raised in St. John's, Newfoundland and Labrador, Canada, Andrew Marc Rowe grew up with a kind introspective lawyer for a father and a warm outgoing sports enthusiast for a mother. He has three siblings, all born within eight years of each other, and the quartet remains close to this day. Despite his mother's best efforts to get him out of the house, he spent most of his free childhood time locked in a basement dungeon with fantasy books, video games and a small tight-knit circle of friends.

When adulthood struck, Andrew gradually began coming out of his shell, traveling to locales as far flung as France, Germany, and South Korea before finally returning home to buckle down and pursue a law degree. All was not well in the realm, however, for upon completion of law school, Andrew found himself in a downward spiral of anxiety and depression.

Andrew's trail upwards began in earnest after a pair of life-changing trips to Peru sent him on a return mission to repair the parts of his life that were broken. His journey culminated in marriage to his soulmate, Ashley, and the birth of his daughter, Iris.

His first three books, The Yoga Trilogy, are Andrew's attempt to marry the thematic threads of the fantasy and mythology he so loved in his youth with the spiritual fiction and yogic philosophy that provided the respite he so sorely needed in his adult years. When he was a child, the former, like the works of Homer and J.R.R. Tolkien, allowed magic and adventure to flow into his world, giving life colour by dint of the strength of his imagination. The latter, like the works of Paulo Coelho, Hermann Hesse, and, well, Patanjali, were balm for his soul during those darker days. His humble intention with his work is to create a colourful chimera of adventure, magic, and spirituality.

A digital copy of the book and my eternal gratitude for helping to make this dream a reality!
YOU DO NOT GET A PHYSICAL COPY OF THE BOOK WITH THIS TIER

A physical copy of The Yoga of Strength when it is published! You will also receive a digital copy of the book.

Three signed copies of the book! You will also get a 10x13 art print of the cover signed by me with a personal message!

5 signed copies of the book! I will also write a short fairy tale or myth about a popular figure of your choosing! The figure must be in the public domain (think Hercules, Robin Hood, Loki) and we will collaborate on certain aspects of the story, at my discretion. We will make sure the process is fun! I will retain all rights to the story. You will also receive all of the lower level tier rewards (digital copy, signed print, sticker, and acknowledgement)!

10 signed copies of the book! You will get a t-shirt! You will also receive all of the lower level tier rewards (digital copy, signed print, sticker, acknowledgement, and short story collaboration)!

20 signed copies of the book! You will also receive all of the lower level tier rewards (t-shirt, short story collaboration, sticker, signed print, digital copy of the book, mention in acknowledgements section) plus a 10 x 13 plaque mounted print of the cover!

25 signed copies of the book! You will get all of the previous items (t-shirt, short story collaboration, sticker, plaque-mounted print, signed print, digital copy of the book mention in the acknowledgements section) plus the author will cook you a curry dinner to eat with him at his house! He has been told that his curry rivals the professional stuff (or the people he cooks for blow smoke - you decide!)

“Nature loves courage. You make the commitment and nature will respond to that commitment by removing impossible obstacles. Dream the impossible dream and the world will not grind you under, it will lift you up. This is the trick. This is what all these teachers and philosophers who really counted, who really touched the alchemical gold, this is what they understood. This is the shamanic dance in the waterfall. This is how magic is done. By hurling yourself into the abyss and discovering it's a feather bed.” – Terence McKenna

One of the questions I get all the time is this: what does ‘The Yoga of Strength’ even mean? I’ve addressed the word ‘yoga’ in my pitch, but to revisit the word: it means to ‘yoke,’ or to ‘unify.’ This is in reference to the three elements that make us up: mind, body, and spirit. The purpose of yoga is to bring them all together into unity. It has religious connotations because it involves the matter of spirit.

There are different expressions of this idea, from seemingly insignificant gestures like bowing, to gratitude, to sacrificing your time or money for another, all the way up to forgiving someone when they have wronged you. There is a reason Jesus pegged forgiveness high up on the rungs of the spiritual ladder. The bigger the wrong, the bigger the signal that you are putting aside your own ego because you have seen past the illusion of separateness, past maya (as discussed in my post about honour at https://publishizer.com/the-yoga-of-strength/updates/2/).

Now, it’s all well and good to read that notion on the page, but how do you actually live the idea that we are not separate? That is what yoga is all about. That’s why we say things like meditation, poses (asanas), or gratitude are yogic ‘practices.’ You quiet the mind and you practice the things that will bring you into your inner Truth. To paraphrase the beautiful band Satsang, you can hold the ideas in your head but you need to hold them in your heart. And to do the same with the luminary Nahko and Medicine for the People, on the road from the head to the heart, do you think you can survive?

Like Andrew Cardiff in The Yoga of Strength, I spent most of my youth stuck in my head. I was an atheist for the majority of my life. I am not going to get into a discussion of all of the reasons why I am not any more, but I will tell you this: forgiving people, forgiving myself – for everything, for all of it – this is what gave my heart some measure of peace. But to actually forgive took courage.

Courage I thought I did not possess.

Courage is a funny thing. The more you practice it, the easier it becomes. When I was younger, I did not have much of it. Like Andrew Cardiff in The Yoga of Strength, I thought I was a coward. I will not tell you all about my life’s story here, but whenever I was faced with a choice, I would be presented with two options. I could listen to the loud voice screaming at me that I would be hurt, or I could listen to the barely audible whisper that I should go ahead and see where life takes me. We might call it our conscience. The Quakers call it the “still small voice within.”

I chose the easier path, the loud one, the one that called me to retreat, the one of fear. I was scared to talk to women that I found attractive, for one. I would go to parties and watch shyly from the corner or remain talking to the boys as the hours ticked by and eventually I went home. There were other examples, like not even going to the party in favour of staying in by myself and playing video games. Or quitting my job teaching English in Korea after my undergrad rather than dealing with the discomfort of being away from home.

Choosing this path, the path of fear, will make you hate yourself. Andrew Cardiff is walking this path at the beginning of The Yoga of Strength. You question why you cannot choose to be courageous, why you cannot do the right thing, why you run and hide instead of standing tall. It must be that there is something wrong with you, that you are broken in some way and you are doomed to forever be stuck in a cycle of failure and regret.

At some point, though, I came upon a wall. I had been choosing to be fearful and I simply could not do it anymore. I hit my own version of spiritual rock bottom. I was faced with a choice: I could continue to cower before life or I could draw myself up, pull my shoulders back, and finally face the world.

I did not start off with huge decisions that required a lot of courage (say, writing and releasing a book). I started off with the little stuff, like trying a new restaurant instead of the same old, opening my mouth and saying hello to a cashier at the store, or finally making my way down to that new yoga studio in town. I did eventually work up to the bigger stuff (I love you, honey 😉) but the biggest of all was forgiving people and letting go of grudges.

I am not going to tell you who I forgave, for what transgressions, or how I did it. That would be disrespectful, dishonourable, and would constitute a huge disservice to them and myself. Suffice it to say that of all of the things I did, forgiving people has been the most difficult.

Forgiving myself – that was the hardest of all.

I was rewarded by having the voice of my conscience get louder. It became easier to follow. A psychologist will tell you that you are extinguishing one habit in favour of another, which is true. But it also means that you blossom.

A beautiful thing happens when you begin to listen to your conscience, when you start to be courageous: you start to develop compassion. Because as surely as night follows day you will see others struggling with the same things that have dogged you. Your heart goes out to them. You start to understand that, “Hey, maybe I am not so different, after all. Maybe I am not “broken.” Maybe we aren’t separated from one another. Maybe we are all connected.”

The inertia starts to lift. The voice deepens. The courageous choice becomes the only choice to make. And life starts to get better: richer, more colourful, more vibrant. Where you started by looking outside of yourself for happiness, you find the fountain that is flowing deep within your heart and it lifts you up like nothing else can.

If you still believe it’s you against the world, bet on your Self. Be courageous when the deck looks stacked against you.

Do what the little voice in your head is telling you is the right thing to do. It is singing the song of your heart.

Never lose faith. You will learn that all the divisions that you think exist within and without you are only the figments of your imagination.

Choose the strength of your soul when your mind tells you that you are weak: this is The Yoga of Strength.

Without your support, this novel does not get published.

Will you consider preordering a copy of The Yoga of Strength today?

Many thanks and much love,