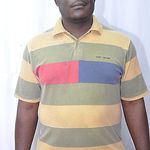 Professionally, I am a writer, poet, and songwriter. I am a messenger of lord Jesus.

Professionally, I am a writer, poet, and songwriter. I am also a philosopher and bible scholar. After completing high school, I started the practice of meditation. After just one year, I discovered my writing muse. So I began writing short stories. From there I branched to poetry writing novel writing, and songwriting. As a result, I have written five novels and two non-fiction books which are yet to be published;I have about fifty poem and forty songs.

One of my works titled THE YOUNGEST KING OF HUNTERS has been included into the national book list for literature.

Even though I am the creative type who only wishes to rely on his abilities, I have gotten a diploma in psychology;and I am pursuing further studies in psychology.

$19 back and digital copy of total doom

2 paperback,2 digital copies, plus special thanks

The coming of the armageddon

An action-packed story with powerful magical characters and personalities, it's a thrilling portrayal of the final battle--the Armageddon.

Pergamus the prime seraph and a horde of rebellious cherubs challenge the  ultimate  being Lord Megas, so with the aid of the holy scepter; the most powerful weapon ever to be  made, lord Megas' favorite being Medon and the  discrete cherubs  subdue Pergamus and the wayward cherubs; and then they hurl them

to the realms down below.

Taking on human forms, Pergamus and his subjests vow to exterminate a certain group of people on earth--the holy ones;and they slay them in their numbers everyday.But two holy individuals--an exorcist priest and a  great yogi--resists the swords of the cherubs. So their leader Pergamus  personally confronts the two most powerful spiritually-minded humans; and he uses his superior wizardry strengths and slays them mercilessly.

Knowing that Medon has to come to the realms down below to possess the body of a boy called Alan to fight against them,Pergamus and the  delinquent  cherubs attempt to kill the boy when he's born,but in vain.

Finally  Medon comes to the realms down below and inhabits the body of Alan for the battle between he and Pergamus and the rebellious cherubs--the final battle between good and evil--the Armageddon.

In order for Pergamus and the disloyal cherubs to bait and kill
Medon,who has now taken possession of Alan's body, they kidnap Alan's mother and keep her captive in their kingdom.
Reaching the cherub's kingdom,Medon,in the bodily form of Alan, stares fixedly at the cherubs and powerful lightning  rays emanates from his eyes and consumes the bodies of all the cherubs.
Looking for Pergamus inside a dark corridor, something like a spear with an octopus-like head suddenly scurries from the middle of the palm of Pergamus and sticks impishly on Alan's  chest. The two most powerful creatures ever to exist--the titans of creation-- engage in the most formidable warlock until Medon finally decimates the body of Pegamus with celestial lightning rays from his eyes.

My future book will be structured as a nineteen chapters  prose book. The book will embody areas of magical fiction,wizardry, and truth,but above all it will portray the battle between good and evil as it showcases an apocalyptic tale in which good finally triumphs over evil.

Even though it is mainly a fictional tale, the story has its foundation on the general and acceptable belief that there's eventually going to be a final battle between good and evil,in which good will  finally vanquish evil. As such, it will not only be a novel that can be read solely for pleasure,but a book that will illuminate the truth to a very great extent.

Being a high fantastical and wonderfully thrilling  fiction story, anyone who  reads it will enjoy it. But for the reason that it deals with an apocalyptic tale, the primary audience for the book  is going to be all adult age groups.

Research has clearly proven that the belief in the apocalypse is one of the  most interesting topics on planet earth. For this reason, it is also one of the best-selling topics in the world.

I'm very active online particularly in popular sites like facebook,twitter, LinkedIn, and soundcloud, where I personally make efforts to promote my works. This will  facilitate the promotion and sales of my work.Also, I will personally invite  fans  and people to to pre-order my book through email.

The following are books that are similar to mine:

What makes my work similar to the above books is its numerous wonderful magical characters, non-stop action, and a unique way of presentation.