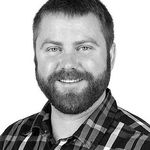 Brian William Waddell is a writer who specializes in arguments. Whether controverting topics in an op-ed column, or crafting characters who engage in contentious disputes, his debates are always engaging and persuasive. While his personal disputation may only relate to a harmless policy decision, the same can't be said of characters that inhabit his novels (The Jeremy Fuller Novels), children’s books (the Lexington Ann Series), comics, or screenplays.

Brian William Waddell is a writer who specializes in arguments. Whether controverting topics in an op-
ed column, or crafting characters who engage in contentious disputes, his debates are always engaging and persuasive. While his personal disputation may only relate to a harmless policy decision, the same can't be said of characters that inhabit his novels (The Jeremy Fuller Novels), children’s books (the Lexington Ann Series), comics, or screenplays.

$5 Ebook Only! But at least you got a new book.

Get the ebook as soon as it is released! You know ebooks are usually a little more than $5, so take advantage while you can in this presale.

$15 One plain-old hard copy (plus ebook)

$25 Signed copy of the book (plus ebook)

So, basically I'm saying my autograph is only worth ten dollars. I think that may even be pushing it. I will personally sign each of the books for those who purchase in the presale at this level. It would be awkward and rude if I had someone else do it.

This category is essentially here for my mother and any future stalkers to make ordering multiple copies easier.

It's debatable whether it would be cheaper to just buy me drinks for a night while you congratulate me on getting my book published. But this way we get to act like the open bar is actually free for you. Effectively, you're making a release party possible with this pre-order level, so you may as well get to enjoy it.

Yes, books do beta-testing too. Read the original manuscript (digital delivery) and let me know your thoughts, feelings, and corrections (on the book, not me, please).

You get professional headshots from the author of your new favorite book? Amazing. I'll sign the book if you want, too.

Take a tour of the "exotic" locales in Unconscious with the author as your guide. You'll see buildings and stores, and streets. It'll be fun. Oh, and a signed copy of the book.

(Brian is not a licensed tour guide, so if anyone asks, he's your "friend.")

There's a catch: Your eyes have to be blue (or changeable to blue). And youngish (retouching does work magic in this respect). And female (or feminine). I'll take the photo myself (yes, I am also a pro photographer) and your eyes will be on the cover. You also get five copies of the book because they're your eyes on the cover.

Yes, for this level of pre-order I'll stop writing the book. And by that I mean I'll come up with a new title, change the name of the protagonist and eat really well for a long time.

A thief who can take over the bodies of others is set up by a crime ring, sending him into a tailspin followed by a quest for redemption.

SPOILERS!!! Do not read all of this if you don't want to know the ending! Read the sample chapters below instead.

Jeremy, a former marine and a bit of a womanizer, lives alone in a small one-bedroom apartment in Manhattan. He goes out drinking with his wealthy friend JJ when he is able, but many of his nights find him unconscious in the emergency room. Jeremy is a thief (art and
jewels mostly), but that isn’t his biggest secret. With a moment of eye contact, Jeremy can push aside the consciousness of another person and take over their body with his own consciousness. This leaves his body, well, unconscious. It’s hard to convict a man of larceny when his body was in a hospital bed at the time of the theft. He takes over the body of Sara, a Pilates instructor, to finish his latest job, but she is brutally raped and murdered. The job was a setup, and it’s clear that someone wants Jeremy out of the way.
Visions and dreams of Sara, of her past and her violent final moments, immediately push Jeremy to self medicate with alcohol. He ends up at his neighborhood bar, where one of the regulars, Al, subtly reveals that he knows what Jeremy can do and that he can do it too. Jeremy blows him off because he doesn’t want to reveal his secret, and isn’t about to have a stranger be the first one he tells. Through a bit of subterfuge, Al is able to get Jeremy alone a few hours later and they discuss their ability and recent events. Jeremy is glad to know another like him, but he is still unsure of what Al has to offer him. The visions continue and Jeremy gets stuck in a cycle of uppers and downers that have him in a fog most of the time. He turns down, or flat out doesn’t do, a couple jobs out of fear of the same thing happening again.

After a while, Jeremy is nearly out of money and needs to work again. He finds Al and takes him up on his offer to train him. The problem is, Al won’t train him if his goal is to become a better thief. He wants Jeremy to find a
more beneficent way to make an income and use his ability to help people, and maybe even stop crimes rather than commit them. So Jeremy rejects the help again and goes after the guys who murdered Sara. They take another life that Jeremy had set into their path, so Jeremy finally decides to change his ways. Al opens up a few new aspects of their abilities that Jeremy had not discovered and Jeremy goes about figuring out who set him up.
Jeremy does some solid detective work and some dismantling of the organization out to get him. Then he finds the place that the guys who murdered Sara go to get their orders. He goes to infiltrate the place himself, and when he fights his way through a phalanx of guards and goons the man at their head is his friend JJ. Jeremy has crippled JJ’s mob and has him cornered, but JJ won’t give up. Jeremy kills JJ in the ensuing battle and in doing so ends the threat to his own life.

Jeremy ends up with a regular job and Al for a mentor. He also goes to Sara’s family to let them know that the men who killed their daughter won’t be bothering anyone else again. But, that’s only partially true since Jeremy will still see them in dreams and visions through their own eyes.

This book is a concept that grew out of a 1000 word short story that simply told the tale of the inciting incident, Sara's death. Many of the small details have changed as Jeremy and Sara have become more complete characters, but that small story has launched this franchise
to what it is today. I have written numerous short stories and screenplays that explore the strange ability that Jeremy has (I also have a roadmap for at least three books featuring our intrepid thief turned hero). These stories delve deeply into the ethical and moral gray areas that are brought about with the ability to control our fellow humans, through the lens of different people with the same ability. Whether it's an attorney attempting to cajole a witness into responding in a way beneficial to his client, or a teenage boy in a hotel room with his prom date, the ramifications of using this power can range from silly to catastrophic.
Although it pulls a great deal of inspiration from the "
wargs" of George R.R. Martin's world in A Song of Ice and Fire, the ability featured in this story is its own creature. At once debilitating and freeing, the power brings up many of the same questions of consciousness that H.P. Lovecraft explored in "The Thing on the Doorstep"  and, to a lesser degree, "The Shadow Out of Time" (stories I read after being well into writing this book).

The chapters here are short and quick
hitting with about 30 chapters in a book of fewer than 250 pages.

People who read science fiction, fantasy, and graphic novels are my audience. Also, those who watch shows such as Game of Thrones, Dr. Who, The Flash, Heroes, and the X-Files would fall under this book's target audience. As we are learning through companies like Netflix and Amazon who have years of data on the viewing and reading habits of millions of people, things like age, gender, and location are poor indicators of what one will consume. Therefore, I will steer clear of these weak indicators and tend toward the media consumption patterns of possible readers.

With a social media reach of thousands across Facebook, Twitter, and Instagram this is a cheap and easy way to connect with potential readers. A
simple ad placement through my Facebook pages will drive hundreds to the book, and it will snowball from there. Living in New York City, it is easy to do readings and signings and appearances for book promotion both in the city and across the Northeast. I also have friends and family on the West Coast who will make marketing there much less costly. Having studied the business of publishing in college, I understand that it is my job to make my book sell, not that of a publisher. (I will take whatever help I can get though!)