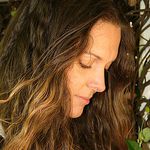 While living with her teacher in India, Krishna became aware of the secret life of Jesus and Mary Magdalene, which evolved into a 22 year quest researching this epic tale.

Krishna Rose was born and raised in England - a landscape steeped in history, poetry, and music, which all became strong influences in her life.  She held a successful career in London promoting famous musicians including Whitney Houston, Fleetwood Mac, Bon Jovi, Aerosmith, Ozzy Osbourne, Pearl Jam, and many others.

Whilst visiting India in 1996 she met a famed Yuga-Acharya Saint, and it was from their discussions that the ache in her to write the story of Woman in Red was conceived.  Leaving London and her career behind, her life-journey evolved into a twenty-two year quest pursuing obscure texts and visiting important archeological and historical sites all around the world in order to accurately research her novel Woman in Red - Magdalene Speaks - which narrates an important piece of untold history.

Krishna Rose is a singer-songwriter having recently released her third studio album, also entitled Woman in Red, which is a musical accompaniment to her debut historical novel.

“The new album Woman in Red by Krishna Rose is grounded in classical and traditional invocations which are clearly inspired by history, folklore and spirituality. Nyckelharper, cello's and Viking drums, interspersed with subtle acoustic guitar, create striking atmospheres which off-set the poetic words and ethereal voice of this British-born songstress – as she weaves her tapestry of womanhood and its contemplative power through the music with her refined dramatic vocals and thought provoking lyrics.”

Dear friends of the Grail,

Thanks to all of you who encouraged me and pre-ordered a copy of my book.  I have been overwhelmed by the enthusiasm of readers around the world, and I see even more now than ever before, just how ripe the market is for this level of knowledge.  It's more than exciting for me!

Just to update everyone on our progress, now we are in negotiations with numerous publishers thanks to all of you, and thanks to Lee at Publishizer who is working hard behind the scenes.  So we might be quiet for a little while, but just know that we are working hard to get the book published and distributed into as many people's hands as possible.  Of course I will make announcements to keep everyone up to date as we go through the process together.  Again many thanks to all of you!  This campaign reached beyond my expections ... so bless you.

All the best,
KR
Krishna Rose