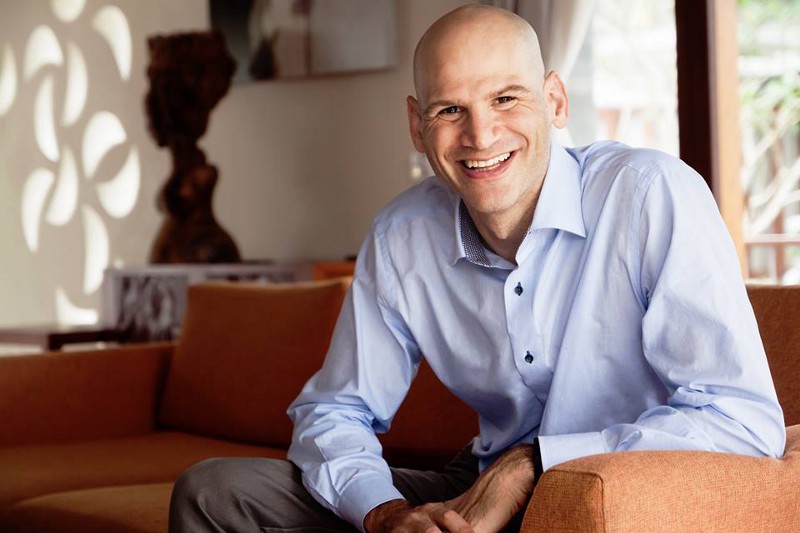 A rare metals expert and a journey with words

Halfway through my interview with David Abraham, I posed the question: What would you say is your area of expertise? His answer:

After some chuckles on my end and a few more seconds of thought, David mused, “Actually, I would say it’s thinking of possibilities and coming up with possibilities.”

Indeed. Being a specialist in rare metals and technology demands, David Abraham’s career has taken him from Wall Street to the White House. However, run-of-the-mill expert he is not; to oversee non-profit operations and to do research on the ground, David has travelled to further lands such as Japan and Africa, interviewing hundreds of people throughout the rare metal supply line and collecting their stories along the way. Happily, David is also an entrepreneur, a co-founder of Outpost Asia, a picturesque and idyllic resort-like integration of shared offices, co-working spaces and accommodation in Bali.

David’s book The Elements of Power was published by Yale University Press in 2015 to critical acclaim.

He explains how rare metals, so often overlooked and unknown to most, are actually key components and crucial factors underlying the building and development of our gadgets, militaries and technologies. Their usage, which comes with many serious environmental, economic and geopolitical implications, has a huge bearing on the future of, in fact, the world.

David follows the path of these elements as they are processed as well as the humans involved in every step of production and trade. There are facts, and there is storytelling. When asked about his work with diverse settings and people, David replied, “Travel helps you learn about yourself and others. I see how the people I speak to see things and get to know their perspectives and why they do the things they do.” But getting to understand someone is not always an easy task. Those involved in illegal activities, for instance, may not be free to open up and talk at all.

David’s route to authorship is an interesting one. “I wasn’t a good writer growing up. But one day a friend wrote a letter to the New York Times and, even though it was only two sentences, it was so biting.” With that, the journey commenced for David, who resolved to brush up on his writing skills.

David sees the writing of a book as “putting together a puzzle without borders.” Get his here.

“While others did crossword puzzles in the newspaper, I wrote letters to the editor. I thought I had worthy observations, but I couldn’t put them into text.” Why letters? “It’s easy to write long but difficult to write short. There’s beauty in being judicious with words.” From his first published letter about bagels and weight loss, David moved on to op-ed pieces, which is “about putting thoughts into coherent written prose” and good practice for practicing argument structure. All this, of course, eventually culminated in the authoring of The Elements of Power. David sees the writing of a book as putting together a puzzle without borders, where the writer determines the number and shape of the pieces and paints the picture. The whole has to be decided by the writer.

A writer or an author?

An interesting remark by David was that “I see myself as a writer rather than an author.” He feels that people who’ve written a book and slogged through the process feel a kinship to one another, no matter how successful the book actually becomes. He points out the similarity with runners in ultra-marathons: “They don’t talk about their finish times, rather, they talk about how they trained or how they felt.” Of course, not all authors are the same. Some prolific authors complete a book within two months, others like David prefer a longer time period; it can take David weeks or months of reflection and observation to see “how all the words and stories fit in together”.

In fact, David has some tips about flow and clarity. “If you have to explain things to someone who has just read your drafts then your writing doesn’t work. Sometimes it’s a word or two. Sometimes it’s the whole thing. When you relook at the piece you must see how that person got confused and change it.” He also suggested requesting feedback from laymen to obtain valuable insights. His book’s most direct intended audience include those in related industries, but David also wanted someone who wasn’t familiar with geopolitics and science to understand, setting his mother as a benchmark. The question was “Could I make it interesting to her?”

David mentioned, “A bestseller can be written if you just focus on one industry and work the hell out of it,” branching out into further connections from a single starting point. He believes that a book can do all the above, studying a subject from different angles and then exploring applications in other areas. Even before his experimentation with language expression and ideas, David has always viewed words as to be a powerful tool for the conveying of thought, and the book a starter of important conversations long overdue in the public sphere.

Even though David has gone the traditional publishing route of engaging a publisher and utilizing the services of an agent, the journey of publishing the book and getting it out into the world was still time and energy consuming, with having to juggle work as well as organizing and speaking at conferences to promote his book. Such is often the case for budding authors trying to make their way in the media saturated landscape of today. When I asked David if he had a specific piece of advice for those who might be considering taking a similar route, his answer was short and succinct, delivered without any hesitation whatsoever:

Make no mistake. The journey is hardly ever easy, and obstacles will always loom in the distance. Yet dedication and hard work can pull one through trying times. Indeed, from his early determination to polish up his writing skills to his commitment to bringing to life the stories he has heard and collected, David has shown that the above two qualities have no substitutes. Some creative energy goes a long way too in helping with life balance. When asked for one exciting project he was working on, David cheerfully replied that running Outpost Asia is pretty cool. “It’s even more beautiful than in the pictures!” he says, and instantly I can picture the swaying palm trees and the private villas, where there are whispers of more adventures to come.