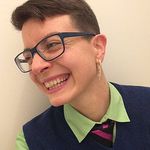 Kaitlyn Hatch has been writing for as long as she can remember. She has six completed manuscripts and several others in the works.

Through her writing (fiction) she aims to explore the untold stories of often marginalized groups, pulling on her experience as a queer women who likes to do drag and from the stories of the many interesting and wonderful people she has met.

She's a contributing writer to Medium.com and the Huffpost.uk blog, as well as having kept her own blog since 2008.

Along with all this writing she's a Buddhist, exploring the teachings through her art and through 'Everything is Workable', a podcast she produces herself.

She has one published book: Wise at Any Age - a handbook for cultivating wisdom. This was her first foray into self publishing and she loved it.

Hey hey! Every little bit counts! For $8 you'll get PDF copy of the book and a 'Thank You' email from the author to accompany the warm happy glow from supporting a struggling writer!

For $15 you get a copy of the book! Your very own! Before it hits the shelves and is available to everyone else.

Thank you so much! This contribution gets you the book AND I'll send you a print of one of my Dharma Art pieces. How cool is that?

Oh wow! Thank you for your contribution!

This gets you a SIGNED copy of the book, plus a Dharma art print. :D

Your generosity is incredible!

This gets you TWO copies of the book, one signed, plus an art print!

You are a SUPERSTAR and everyone is gonna know it!

For $250 you get THREE copies of the book (one of them signed), an art print AND your name published in the list of 'Thank Yous', because you're just that awesome!

You are one of my favourite people ever. Seriously, your support is fantastic!

For your generous contribution of $500 I will send you TEN copies of the book (Including a signed FIRST EDITION hardback) and an art print, include your name in the 'Thank Yous' in book AND ring you to thank you personally for being so amazing!

You totally fabulous person, you! I don't think words are enough to describe the gratitude I have for your contribution.

I'm sending you TWENTY copies of the book (X2 signed First Edition hardbacks), an original piece of signed art, putting an official 'Thank You' in the book and taking you out for dinner.

Okay, well, the dinner thing might be difficult if we live far apart, but you know what? You're worth it. I'll do everything to make it happen. Even if it happens over skype and I have to have the restaurant send me the bill.

A tale of six strangers living in a London apartment building, their lives & struggles unnoticed between them until they begin to intertwine

As each narrative continues the details of the personal trials of each character come to light and the character begin to reach out to each other in various ways. Ultimately, even the most cold and distant character is met with compassion.

There are nineteen chapters and an epilogue.

This book is similar to the writing of Nick Hornby, Douglas Coupland and David Nicholls, most notably:

‘A Long Way Down’ - Nick Hornby

‘How to be Good’ - Nick Hornby

‘All Families Are Psychotic’ - Douglas Coupland

The strongest difference to this piece and similar contemporary works of fiction is that it has been written with the understanding that all people are basically good - as in, no one does anything because they want to feel worse.

This book explores how we are interconnected through the characterization of six strangers who, on the surface, think they have an apartment block in common and nothing else.

People watchers - the sort who look at someone on a bus and wonder who they are, where they’re going, what their day was like and how they came to be on that bus at that moment. Anyone who has been curious about the windows their train passes or the untold stories of the homeless person they see every day on their way to work. The ones who look at the cars around them on the motorway (or highway) and wonder who everyone is and what their destination is that day.

I’ll be doing the promotion of this book via my many social media accounts, my website and through blogging. I have a three month marketing plan in the lead-up to making the book available to the public at large. Those who pre-buy by supporting this campaign will receive their books in advance.

At the time of this writing I have 249 ‘likes’ on my Facebook Page with an average growth of 1 like per week.

I have 1,127 followers on Twitter, with an average growth of 5 per week.

My Medium account has the best growth and reception and will be the biggest platform for me to promote the book. I currently have 1,023 followers with my most successful comment gaining over 7k views and an average growth of 10 followers a week.

I also have a monthly newsletter with 63 subscribers. While this number is low it has been growing steadily since I started sharing plans of this campaign. My intention is to use this campaign to increase my subscribers for future publications.

Once the book is fully edited, laid out and ready to be submitted for print I’ll order some advance copies to gift to various authors, including Matt Haig, Elizabeth Mattis-Namgyel, Rick Mercer and Jenny Lawson, requesting quotes for the cover and support in promoting it. I have already begun to contact these people, as well as other writers through Medium and Twitter.

I am working on a plan to contact local booksellers to where I’m living at the time and arrange for an official book launch and signing.

If I am able to raise enough I will organise a national/international book tour and marketing campaign with the support of Publishing Push.

Launch and span of crowdfunding campaign for the entire month

Final editing, layout and pre-print copies of the book ready to go.

Final print version sent to backers, along with other perks ($500 - $5000CAD depending on number of pre-orders for cost of printing and postage)